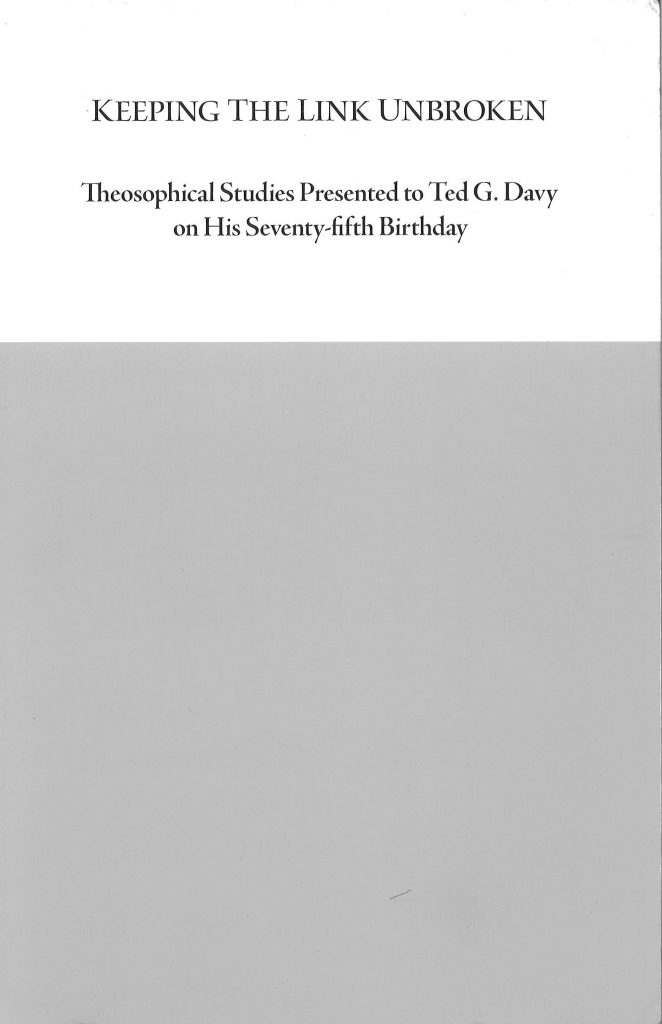 This festschrift consists of 14 essays by internationally known scholars on a range of topics in Theosophy, dealing with Theosophical teaching & history, and the honouree of the collection. Doris Davy begins with ‘Life with Ted‘, John Patrick Deveney examines Theosophical history as a subject in ‘Ozymandias‘, David Reigle explains ‘The First Fundamental Proposition of the Secret Doctrine‘, Robert Hutwohl discusses ‘The Previous Buddhas‘. Other articles are: ‘The Secret Doctrine of the Rabbis‘ (Spierenburg), ‘Esoteric Christianity Reconsidered‘ (Price), ‘Anagarika Dharmapala at the World’s Parliament of Religions‘ (Gomes), ‘An Early Attempt of Fraternization‘ (Santucci), ‘Biographical Notes on Sri B. P Wadia‘ (TenBroeck), ‘Victor A Endersby‘ (Hejka-Ekins), ‘Lizzie Arthur Russell Theosophical Memorial Trust‘ (Pelletier), ‘Personal memories of Early Theosophists‘ (Sutcliffe), with a concluding ‘Acrostic for Doris & Ted Davy‘ (Colombo).

Ted Davy was a prominent worker in the TS in Canada, and subsequently in the Edmonton Theosophical Society.