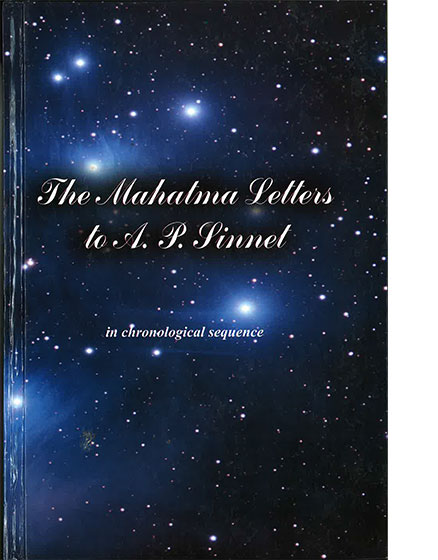 The Mahatma Letters to A P Sinnett – chronological edition

One of the classics of Theosophical literature, these are letters written by the Mahatmas Koot Hoomi & Morya to A P Sinnett & A O Hume during the early years of the Theosophical Society. The depth & profundity of these teachings have been a source of inspiration to students all over the world. This edition arranges the letters in their chronological sequence; to further help the reader appreciate the circumstances surrounding the letters, brief notes to each letter are included.

“Nature has linked all parts of her Empire together by subtle threads if magnetic sympathy, and there, there is a mutual correlation even between a star and a man; thought runs swifter than the electric fluid, and your thought will find me if projected by a pure impulse, as mine will find, has found, and often impressed upon your mind. We may move in cycles divided – not entirely separated from each other. Like the light in the sombre valley seen by the mountaineer from his peaks, every bright thought in your mind, my Brother, will sparkle and attract the attention of your distant friend and correspondent. If thus we discover our natural allies in the Shadow-world- your world and ours outside the precincts – and it is our law to approach every such an one if even there is but the feeblest glimmer of the true “Tathagata” light within him – then how far easier for you to attract us…”