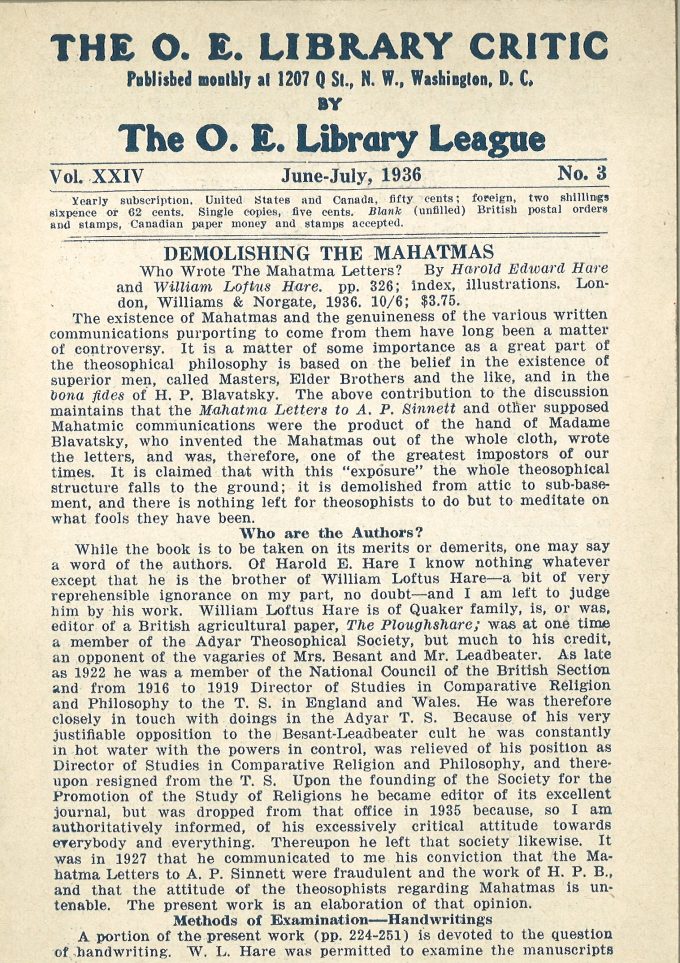 Edited by H N Stokes. The Origins of the OE [‘Oriental Esoteric’] library critic lay in the OE Society & ‘The Order of the Initiates from Thibet’. After falling out with the leader (and managing to win back the vast amount of money the ‘Thibetan’ had taken from him), Stokes joined the Adyar TS, running his library and publishing this bulletin. Stokes’ two abiding interests were Theosophy, and penal reform (the bulletin was largely focused on the latter in its early years).

As the years progressed, Stokes became less positive about he occult claims of Annie Besant and Mr Leadbeater, and more open to the teachings of the Point Loma School, as well as the efforts of the United Lodge of Theosophists to promote a focus on Theosophy’s founding literature. Professor J Santucci [Theosophical History] claims that Stokes was a significant player in the Adyar TS working to encourage the study of the works of Mr Judge, H P Blavatsky & The Mahatma Letters to A P Sinnett.

The ‘Critic’ was published as a 16 pp pamphlet, and is quite scarce [so too is the out of print photostatic reproduction of the entire run by the Edmonton Theosophical Society], although scanned pdf’s are freely available online.

These 10 issues cover, among other topics, ‘Krishnamurti’s Declaration of Independence’, AMORC, the Ballards & The Mount Shasta Myth, The I AM teachings [he is not a fan]. With 1 copy aside, there is a valuable running critique of the Hare book on the Mahatma Letters (which had accused HPB of Fraud): Demolishing the Mahatmas/Did HPB Write These Mahatma Letters/ Bogus Mahatmic Americanisms of the Brothers Hare/ Choice Titbits from the Hares book/ Hare Brothers Arsenal of Duds/ Hares on the Motives of HPB/ Hares Use a Boomerang in Rebuttal/The Hares on He-Mahatmas & She – Mahatmas/ Reviewland [critiques ‘The Occult Review’, and Dion Fortune writing in ‘The Inner Light’].